The EMC Children’s Clinic Hematology Department is responsible for the preventative care and treatment of blood and hematopoietic system disorders in children of all ages.

Contact the hematologist if you notice that your child has frequent spontaneous nosebleeds, a tendency to bruise easily, and takes a long time to stop bleeding after undergoing laboratory tests.

Abnormalities (low neutrophil count, high lymphocyte count, low hemoglobin) during a routine blood test, for example, before a vaccination or when preparing a medical card for kindergarten, are also indications to consult the pediatric hematologist.

Enlarged lymph nodes should also could be a concern because they can be a sign of lymphoma or leukemia. In the majority of cases, these fears are not confirmed. Enlarged lymph nodes are most often caused by a viral infection. Nevertheless, it is important to pay attention to any changes in the child’s physical state, and in this case an appointment with the pediatric hematologist will not be a waste of time. After all, hematologists are specialists in the field of blood and lymphatic systems.

The main methods of hematological disease diagnosis are various laboratory blood tests. The EMC laboratory carries out more than one thousand different types of testing, 24 hours a day, including weekends and holidays, as well as emergencies: many tests are ready within 30-60 minutes after taking a sample, which allows doctors to make the correct diagnosis as quickly as possible. 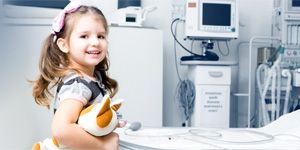 Acute otitis media
The role of hereditary and external factors in a child’s psychological development
Baby Teeth: Encyclopaedia of Errors
All articles

Multifunctional hospital in the center of Moscow
All videos