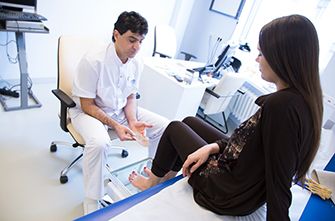 The European Clinic of Sport Traumatology and Orthopedics proposes patients individual orthopedic insoles designed according the anatomical features of the foot. This greatly distinguish individual insoles from standard ones, designed to correct average pathologies. Individual insoles are manufactured according to the patient’s foot; the patient can immediately try them on and leave our clinic in 20 minutes with ready-made insoles.

What are the advantages of the way insoles are produced in ECSTO?

Most techniques generally obtain the foot print during the physical load. As a result a sort of a negative is obtained instead of the foot itself in the physiological position. What we do is take the foot print in relaxed position and further adjust it to the correct orthopedic configuration placing the insole blank properly. All mentioned above takes 20 minutes. The patient leaves us with ready to wear insoles.

Which deformities can be corrected by wearing such insoles?

The insoles are able to correct hallux valgus and varus deformities of the foot, calcaneal pronation and supination. The particular feature of the insoles is the ability to correct every part of the foot separately. In this case the anterior segment can be adjusted in one direction, the medial in another etc. and all this within one insole.

It is important to note that the insoles are essential not only for foot pathologies. A foot is the support for the whole body. When foot is positioned incorrectly, the overall load is incorrectly distributed to the overlying departments of the musculoskeletal system, including genual and coxal joints and the lumbar region of vertebral column.

Wearing the insoles also eliminates callosities, which form on the incorrectly positioned foot especially in the areas of II, III and IV metatarsal bones' heads. A callus is the protective reaction to the incorrect pressure. The pes planus leads to metetarsal heads pulling down, resulting in callus formation; these callus further provoke pain while getting tougher.

The genual joint pain is sometimes associated with no morfological changes within the joint; in this case the pain can be provoked by the feet position. In this situation it is sufficient to produce special insoles in order to release the genual pain.

How are the insoles produced?

The patient's foot is fixed manually and hold in the right position with special devices. Made of special plastic material, the insole blank is previously warmed to optimal temperature.and then placed on the foot The temperature of the blank is kept at skin comfort and do not cause any unpleasant sensations. The insole is further adapted according to physiological features of the foot and to the correction objectives. Finally the insole is adjusted to the patient’s footwear. In less than half an hour the patient leaves our clinic with new insoles.

What are the distinct features of the insoles, produced in ECSTO?

The ECSTO insoles have a considerable advantage being manufactured by the attended physician himself. The main thing is that the insoles can be corrected. When the patient feels inconvenience while wearing the insoles, it is possible to alter their shape according to his requests and treatment objectives. The work with the insoles is conducted till formation not only physiologically correct but also comfortable foot position.

Multifunctional hospital in the center of Moscow
All videos